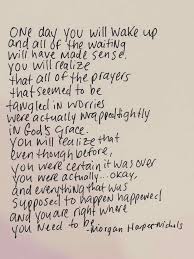 So often in my life, God’s plan just doesn’t make sense? I mentioned this some in last weeks blog. There was Joseph trying to do the right thing and he still got in trouble and was thrown into prison because of Potiphar’s wife’s lies. But this week we find out that God needed Joseph in prison! That sounds a little crazy and certainly doesn’t make sense to us, but here it is.

Sometime later, the cupbearer and the baker of the king of Egypt offended their master, the king of Egypt. Pharaoh was angry with his two officials, the chief cupbearer, and the chief baker, and put them in custody in the house of the captain of the guard, in the same prison where Joseph was confined. The captain of the guard assigned them to Joseph, and he attended them. (v. 1-4)

For God’s amazing work in and through Joseph to be accomplished, he needed to be in prison so he could meet the King’s cupbearer and baker.  God had given Joseph the amazing gift of interpreting dreams. He was able to show the King’s helpers this talent when they shared their confusing dreams with him in prison. And just as we get our hopes up that Joseph might finally be released for the crime he didn’t commit, we read the last verse of the chapter.

He restored the chief cupbearer to his position, so that he once again put the cup into Pharaoh’s hand—but he impaled the chief baker, just as Joseph had said to them in his interpretation. The chief cupbearer, however, did not remember Joseph; he forgot him. (v. 21-23).

What?! After all that, more disappointment. It must have seemed like things were getting looking up again and God was hearing Joseph’s prayers. Surely, he prayed every night for God to release him from the dungeonous cell he had been sentenced to.

So no, Joseph doesn’t get out of prison in this chapter, but what if he had? It would have been tragic because when King Pharaoh (coming in Chapter 41) needs his dream interpreted we see the cupbearer’s memory is restored and it will be God’s perfect timing for Joseph to come face to face with the king so he can realize all Joseph has to offer his kingdom.

If the cupbearer had remembered Joseph in chapter 40, he would have been grateful, hit the road back home and would have never fulfilled his destiny for God’s glory and His people. This is super convicting for me. So often, I can sit and wonder where God is and why I’m having to endure the trials before me. All the while, God is at work and striving to achieve His glory and plan through me. I pray that I can remember this each and every time I am facing a challenge or trial. I pray that I can hear God’s whispers above my fear as He says, “Allison, you are right where you belong. I’m here with you. You are loved. Hang in there! Use my strength and courage. Don’t try to rely on your own. Just wait, because your story isn’t finished yet and I’ve got an amazing plan for your life.”

As much as I pray I will remember this, I pray also for each of you to remember it as well. You are loved!

One thought on “Genesis 40 – Right Where You Belong”

This site uses Akismet to reduce spam. Learn how your comment data is processed.