And I tell you that you are Peter, and on this rock I will build my church, and the gates of Hades will not overcome it. Matthew 16:18

My husband recently had a conversation with a friend who is relocating some businesses who rent office space from him. He described one tenant he was helping as a “sort-of” church. When I gave him a strange look, he explained that they didn’t worship God, but were just a spiritual group of some sort. They told our friend that they would consider moving into a real church if they needed to. They would just take all of the “Jesus” stuff out of it. When THEY received a strange look from our friend, they quickly said, “Don’t worry! We won’t throw it away – we will just store it.”

Wow and Wow!! As scary as that sounded – it resonated with me and reminded me that as people we do this same thing sometimes. We “store” Jesus. No, we don’t throw Him away. His words are tucked deep in our hearts, but sometimes when we listen more to the world or minds instead of Him – we store Him. We do what we want. We do what feels good at the time.

Keep watch over yourselves and all the flock of which the Holy Spirit has made you overseers. Be shepherds of the church of God, which he bought with his own blood. Acts 20:20

I did this in college. I conveniently stored God on a shelf while I went out and did whatever pleased me at the time. Then, in the quiet of the night, I would pray for forgiveness. However, the next day I would head out again and do the same things destructive things over and over. I’m so thankful for all of those who prayed for me during that time. I eventually came through the other side of that “storing” time and put God front and center in my life again.

But don’t be deceived. Even as strong Christ followers we fall victim to this “storing” problem. When do you tend to store Jesus away? When times are good? bad? When you are busy? When you are hurt or have lost someone close to you? When God doesn’t seem to be hearing your prayers? My prayer today is that we pay close attention to the position our Heavenly Father has in our lives and hearts. That if we begin to sense we are brushing Him aside, an alarm will go off in our hearts and souls so we can correct that position.

May God NEVER be stored away and hidden from us! May we never know a day without Him! Not only for ourselves, but so we never lead others astray.

For I am not ashamed of the gospel, because it is the power of God that brings salvation to everyone who believes: first to the Jew, then to the Gentile. Romans 1:16

Ever wondered or just been curious about homeschool? Is everyone weird? Do all the moms wear jean overalls and kids hide in corners from being unsocialized? Don’t feel bad  . . . most of us have thought it.

I invite you to attend an excellence in education event to learn more about Classical Conversations and homeschooling. I’m not getting paid to post this. I wasn’t even asked to do it. I just adore this God centered program that we are now a part of and want others to know about it. Not because I think everyone should homeschool their kids – because it’s not for everyone, but because when something wonderful is going on in your community we should know about it. Come and see what some of the future leaders of America are doing in Classical Conversations. 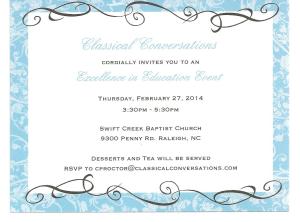